use MY data is a movement of patients, carers and relatives

use MY data supports and promotes the protection of individual choice, freedom and privacy in the sharing of healthcare data to improve patient treatments and outcomes.

use MY data endeavours to highlight the many benefits that appropriate usage of healthcare data can make, to save lives and improve care for all.

use MY data aims to educate and harness the patient voice to understand aspirations and concerns around the use of data in healthcare delivery, in service improvement and in research, aimed at improving patient decision making, treatment and experience.

A movement of patients, relatives and carers
Harnessing the patient voice to build confidence in the use of patient data
to save lives and improve outcomes
.

Patient data citation :
"This work uses data provided by patients and collected by the NHS as part of their care and support"

In 2015 use MY data proposed the inclusion of a citation on all publications using patient data, to state that the data used within the publication comes from patients.

The citation would be a recognition of some of the benefits of using patient data, and would acknowledge the patient contribution as well as highlighting how the data has been used.

The proposal was initially discussed with use MY data members, then at a joint workshop with patients and cancer researchers at the annual conference of the National Cancer Reseaech Institute (NCRI) and was also discussed as a principle at a joint workshop at the All Party Parliamentary Group event, Britain Against Cancer. 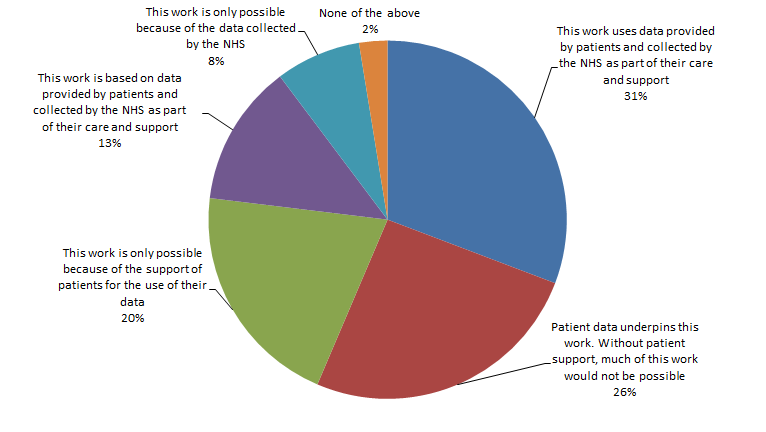 use MY data hosted a public consultation in 2016, via its website, to choose a citation from a list of five options that were suggested by patient advocates. After a period of voting, the most popular choice was:

This work uses data provided by patients and collected by the NHS as part of their care and support.

The voting breakdown is shown in the graphic.

Following the conclusion of the voting, we wrote to organisations that use cancer patient data and requested that the citation be used, reflecting the wishes of use MY data members and the public. The UK and Ireland Association of Cancer Registries responded in early 2017 following a meeting of the Association, indicating that they would be pleased to adopt the citation across their work, from March 2017.

In June 2017, large numbers of presentations and analyses at the Public Health England (PHE) Cancer Data and Outcomes Conference included the data citation for a large, mixed audience for the first time, with very positive feedback.

The Public Health England (PHE) Office for Data Release were also asked whether they would consider making it a condition that all academic outputs using PHE data should adopt the citation wording. In July 2017 they indicated that they intended to implement this for all contracts raised from July 2017 onwards.

Understanding Patient Data have supported the citation, highlighting the importance of keep giving the message that patient data underpins research and care. They have encouraged everyone to use this citation on all work underpinned by patient data including publications, event materials and press releases.

If authors have more space, or want to give further detail in the ‘notes for editors’ in a press release, they have been encouraged to use this paragraph to explain the importance of using data: 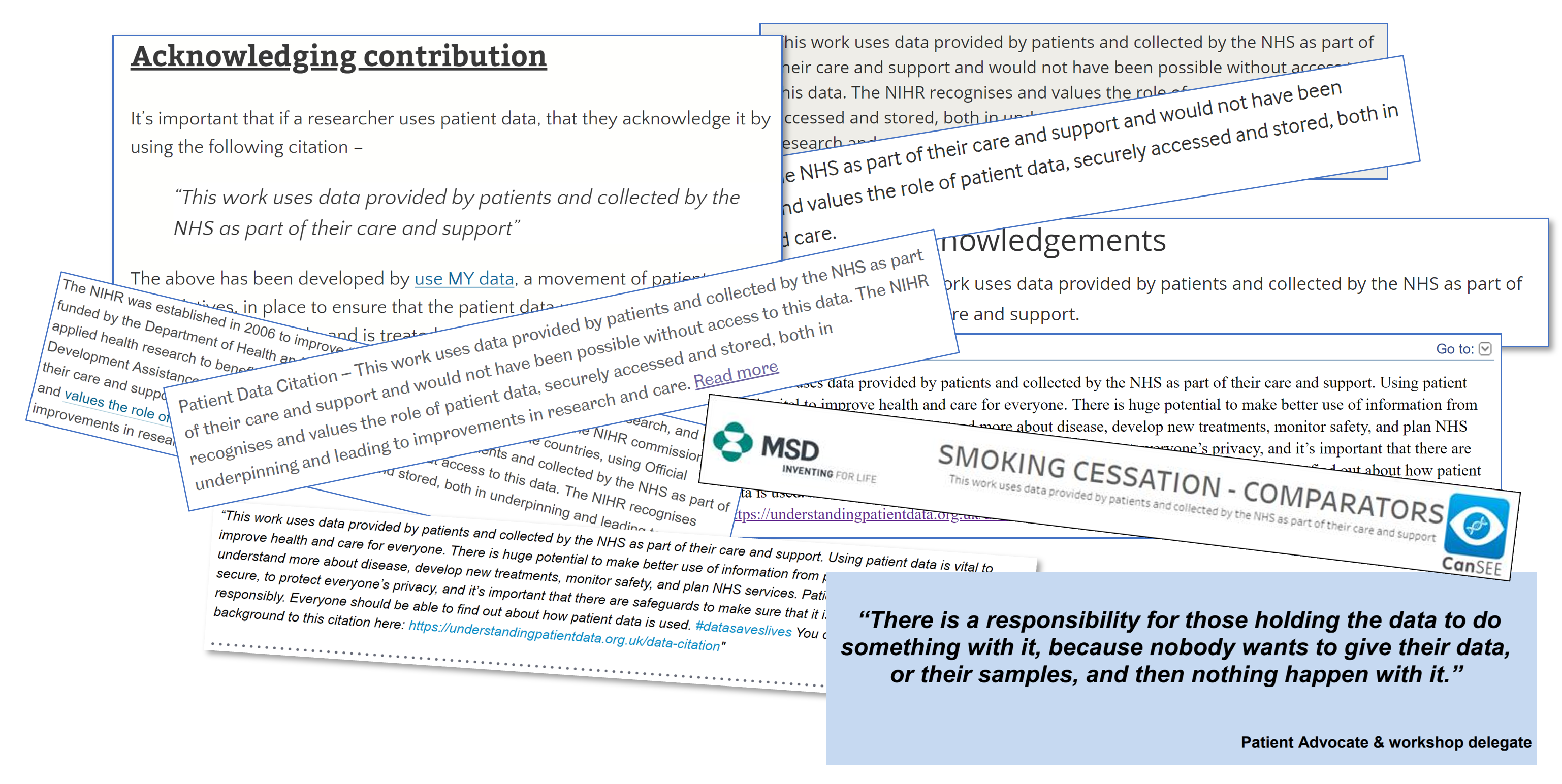 “This work uses data provided by patients and collected by the NHS as part of their care and support. Using patient data is vital to improve health and care for everyone. There is huge potential to make better use of information from people’s patient records, to understand more about disease, develop new treatments, monitor safety, and plan NHS services. Patient data should be kept safe and secure, to protect everyone’s privacy, and it’s important that there are safeguards to make sure that it is stored and used responsibly. Everyone should be able to find out about how patient data is used.”

The citation began to be widely used across a range of outputs and publications from large numbers of academic institutions and commercial organisations and has been adopted national bodies such as the NIHR, Public Health England, the Office for National Statistics and many research charities.

Health Data Research UK (HDR-UK) are an independent, non profit organisation supported by 10 funders which brings together 22 research institutes across the UK.

In July 2019, recognising the importance of acknowledging the use of data, HDR-UK asked researchers and technologists to cite the use of patient data using the citation developed by use MY data. 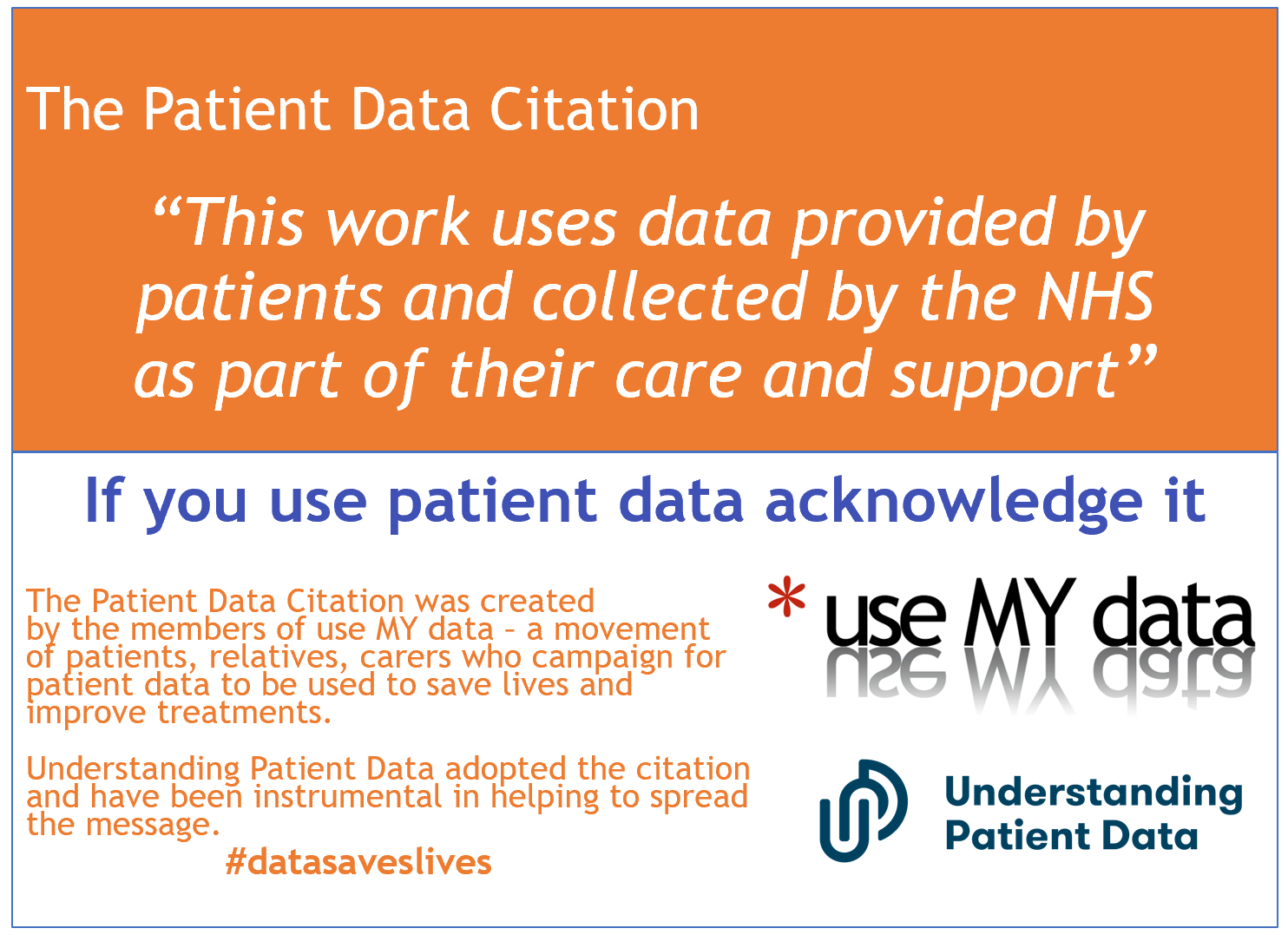